In accordance with the goals of the PMSA, BRAVEinMS is set out to find a way to promote neuroprotection and/or remyelination in PMS. Our proposal has the following main objectives: (i) developing and testing in silico and in vitro strategies to identify whether registered or drugs with known safety and pharmacokinetic (PK) data in human can be pursued as neuroprotective/remyelinating compounds in PMS; (ii) providing in vivo evidence of pharmacological activity of a small number of drugs in an efficacy study on different small rodent disease models; (iii) unraveling mechanisms of neuroprotection and/or of improved myelin regeneration; (iv) attempting to study neuro-glia interactions in vitro; and, (v) anticipating combining treatment strategies. The current strategies to interfere with those mechanisms are not free of shortcomings, and include: (i) modulation of intrinsic signaling pathways of myelin regeneration and repair - unfortunately, given the tremendous amount of cross-talk, manipulation of one often induces alterations in another, thus hampering the expected outcome; 43 (ii) restoring the altered lesion environment (glia scar and myelin debris) to favor OPCs differentiation and maturation - the unpredictable pattern of demyelinated regions throughout the CNS makes local delivery of lytic molecules very difficult;44 (iii) enhancing cell survival (lactate supplementation or reducing metabolic stress) of oligodendrocytes - as above, some signals have opposite effects, i.e. signaling silencing interferon-gamma (IFNγ) in astrocytes alleviates symptoms in experimental autoimmune encephalomyelitis (EAE) while in microglia it increases disease severity45; (iv) enhancing cell survival of neurons (reducing oxidative stress) - unfortunately, there are also alarming reports on detoxificant enzyme overexpression strategies related to their activation in cancer cells.46 Encouraging examples of molecules with remyelinating and/or neuroprotective properties already proposed to Phase I/II clinical trial are represented by laquinimod (NCT02284568), amiloride (NCT01910259), fumarate (NCT02087631), clemastine and benztropine (NCT02040298), miconazole, and clobetasol (approval for phase 2 trial in MS could occur quickly), and rHIgM22 (NCT02398461). 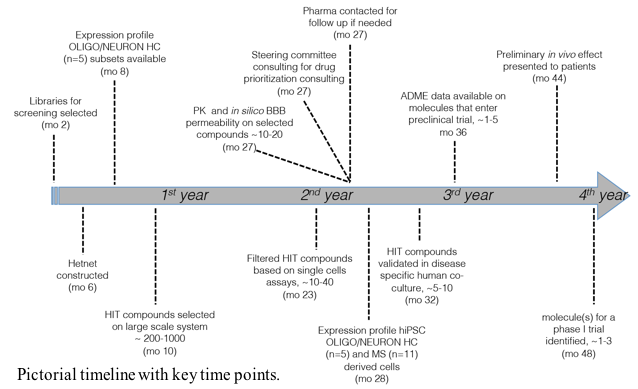 Overall, we expect that our project will provide advances compared to state of the art approaches for the followings. First, we will combine/compare findings obtained using commercial bioinformatics tools with flexible open source tool ad hoc developed and curated by consortium partners experienced in refining and integrating drug information. Second, neurotoxic and myelodegenerative conditions will be reproduced in our in vitro assays before drug treatment, planning a real therapeutic approach. Third, only reproducible data will be pursued: independent laboratories will test selected drug hits using different equipment, assays, personnel and imaging/analysis software. Forth, we will compare diseased with normal fetal- and induced pluripotent stem cell (hiPSC)-derived oligodendrocytes and neurons from healthy controls and MS patients, providing the unprecedented opportunity to generate an in vitro platform of disease-specific human cells (disease-in-a-dish). Moreover, neuro-glia cells will be differentiated from hiPSCs obtained from patients with different MS disease coruses, possibly enabling the identification of drugs acting on one (or more) disease forms, with enormous advantages for future stratification of patients in clinical studies and for setting up personalized medicine. Fifth, we will do compound characterization in terms of validation and/or identification of the mode of action (MoA) together with in vitro and in vivo pharmacology to produce an informed efficacy study. Last, since this proposal focuses on the PMS, our findings might also have a useful impact on basic understanding of other neurodegenerative diseases. In Figure 2 a synthetic flowchart of planned key events is presented.